You visited the UK a few years back as a guest rider on The Big Push with Shiner and spent most of your time in the north of the UK, whereas last year you were back here again, on a Real tour that saw you skating mainly around the south. Did you feel there were any big differences between those two areas of the country?

I didn’t feel as though there were any major differences in those areas of the UK besides people’s accents. I was psyched to get to spend some time in London and skate all the legendary spots there though, because I didn’t get the chance to the first time around.

Your family is really athletic with your dad being into basketball and your brother a professional football player for the Carolina Panthers. It’s well known that you actually drifted away from hockey because of skateboarding when you were younger – was your dad supportive of you veering towards skating instead?

I think my dad just wanted to be involved in what I was doing. He loved sports and watching my brother and I play and coached us. I also think my parents were worried skateboarding would lead to me getting into trouble. All in all, over time they supported it 100% because they knew how much I loved doing it.

American Football is obviously quite a hands-on and rough sport. Who do you think gets beat up harder with their respective past time – you or your brother?

(Laughing). I would say that I probably get beat up more on a regular basis, but my brother has had a lot more major injuries than me.

Mr Brockel gets high in Tottenham like many others whilst Jeremy keeps an eye on him (fish) Photo by CJ.

Was there any trick or piece of footage in Through and Through that was a particularly hard battle for you?

The back 360 on the bump over gap was a battle – mostly due to shitty weather. It was the last two days of a trip we were on from Vegas to El Paso. We went there the first day and it was super windy and my board wouldn’t stay on my feet so we went back the next day. This time a storm was approaching so I knew I had limited time. I ended up doing it, and as I’m rolling away it started raining and then hailing. So I lucked out on that one, (laughing).

The video basically happened from you guys just going out skating – there was no actual plan to make a video, right?

Yeah we didn’t really have a plan. Just going on trips and filming. A lot of the team was filming for other videos, so when they realized that the guys who weren’t filming for anything specific had a whole bunch of footage we decided to put something together.

From your perspective, what were the major differences between filming for Since Day One and Through And Through?

Nothing too major: I kind of snuck into Since Day One at the last minute. They hit me up to have footage in it and then I went on the last couple of trips before the deadline. Through and Through I was on all of the trips and it was an all HD production as well as opposed to Since Day One, which was a mix of VX and HD.

Had you filmed much with Jeremy before embarking on Through And Through?

No I had never met Jeremy prior to Through And Through. He just started coming on trips with us last year. He’s basically a younger version of Dan Wolfe. Really tech savvy and motivated to make quality videos.

Even though it was a more montage-based project this time around, you still had the ‘last part’ so to speak. Did you know beforehand that you were going to be closing the video down, or was that sprung on you when you first watched it?

Once the video began getting put together Jeremy hit me up and was telling me about the video and then mentioned I was going to have the last part.

Did you guys have any sort of team premiere for Through And Through before it dropped on Thrasher, or was the first time you got to see it the same time as everyone else?

The night before the video was released online we held a premiere at the Soma West skatepark in San Francisco. We basically just barged it. The crew at Deluxe got the projector screen and the sound system together and just held a pop up premiere at the park.

What do you personally think to the montage based style of editing of Through And Through compared to that of a part-by-part video like Since Day One?

I think it was awesome. It gave the video more of a feel of ‘this is the REAL team’ if you like. These guys kick it all the time together and skate. Don’t get me wrong, I love videos that are part by part too but I think this really worked well.

You shared a part with Massimo Cavedoni in Since Day One and I think it’s safe to say that he’s a pretty low-key figure. Can you shed any light on what he’s been up to lately?

I actually still hang out with him all the time. I recently moved to LA and he lives real close to me, so he is always out skating with us. 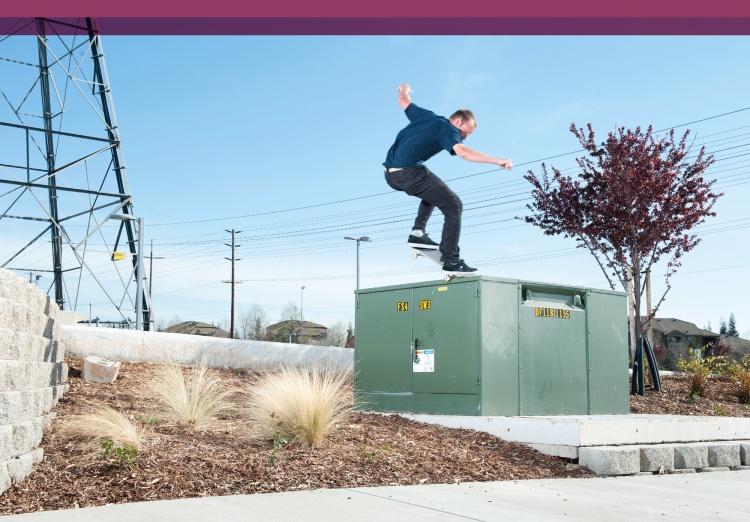 No messing frontside nosegrind at quite a pelt. Photo courtesy of Gabe Morford.

Any backroom talk at DLX about you going pro soon?

You know how we do it at Deluxe. We keep everything under wraps, (laughs).

Nearly everyone who I’ve spoken to about Real considers it more of a family than a team – how tight knit is everything between you guys, Jim and Tommy?

Real and DLX are definitely a family. We don’t just throw anyone on the team. We all hang out all the time and skate and stay in touch. That’s the way it should be. The best thing about having those guys in charge is how much they love skateboarding and what they do for skateboarding and skate shops, etc. Nothing is just for show – it’s all from the heart.

What have you got lined up project-wise now that Through And Through has been wrapped up?

Right now I’m just out filming and trying to put something else out as soon as I can.

Also, whilst we’re here, is there any message you want us to pass onto Nicky Howells for you?

(Laughing), I actually just ran into Nicky recently in LA. He was out here with some friends skating. Super random. I was stoked to see him though. It’s been awhile.