Before the premiere of Nike SB’s ‘The SB Chronicles Volume Three’ the other week, I saw down for a chat with one of Polar’s resident Vikings, Hjalte Halberg. It would be easy to assume, judging from his powerful nature on a board and Nordic stature, that Hjalte would be a fairly intimidating figure but this proved not to be the case whatsoever. Read on to learn more about travelling with the swoosh and the upcoming (and it is coming, promise…) Polar video.

You have visited the UK pretty frequently over the last few years, how do you think the skate scene here compares to back home?

Does it seem cliquier here to you? As you’re quite notable and the scene  at home is small does is it seem that a lot people know who you are?

It has to be when it’s this big I think, it’s not possible that everyone is friends. We have cliques too but everyone kind of skates together. If I’m going skating, I’m usually going alone and just trying to meet someone at the park. The skaters know who I am but I know all of them so it’s not uncomfortable, it’s mellow.

I heard you’ve been on some trips to try out a new shoe with some of the US Nike team like Bobby Worrest and Donovon Piscopo?

Yeah, actually that trip was to Barcelona to film a clip for that shoe. That wasn’t that big of a deal but I’ve had some really fun trips to America with Bobby.

We did that Core thing in upstate New York. That was sick, it was smaller cities above New York; we went to six or seven cities. I’m going to do some trips with Bobby in the future as well.

It’s the SB Chronicles Volume Three premiere tonight and you make an appearance in Karsten Klappen’s part. How did you get to know Karsten?

I have one trick (laughs). Kingpin had this awards thing and all the ‘skater of the year’ guys who were nominated went on a trip together. That’s how I met him the first time I think. I knew who he was because he’s from Oslo and it is close by. We had fun and then he got on Nike right after that and we did a trip to LA together. We set up for a month in LA and I went skating with him and the Chronicles guys. I started knowing all those guys and they thought it would be cool if I had a trick in his part.

You mentioned earlier that you’re flying out to Oslo tomorrow, is that to see Karsten?

It’s to surprise Karsten actually, he doesn’t know. It’s all his homies and friends; they’re going to do a premiere for him. Same style as here but I heard they’re going to pick him up in a limo and shit like that…

You skated at Southbank for a bit earlier today, how does it compare to spots back home?

It’s amazing that it’s undercover. It would be the sickest spot to have in your own city but it’s hard to skate for me, you’ve got to be a local guy there. It’s so small too; it feels like you’re in a little parking garage (laughs). 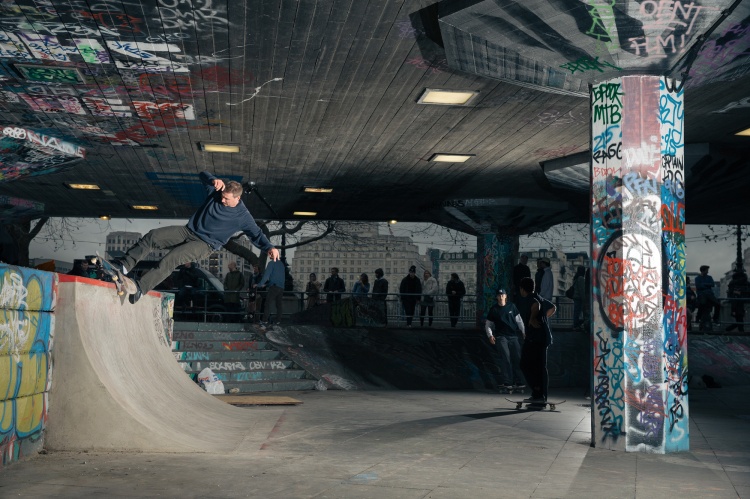 Hjalte hurricanes on Southbank’s new transition addition. Photo by our mate Chris Johnson, click above to check out Sidewalk’s photo gallery from the pre-premiere SB sesh on the new features.

Have you spent much time in Malmo lately and seen anything of Pontus (Alv)?

Usually I go there once every week in the wintertime because they have a really good indoor park. It’s the best indoor park I’ve ever skated, so big and open, it’s really dope but now our indoor park is quite good so I’ve not been going too much. He’s so busy editing the video; I don’t want to disturb him (laughs). I see him once a month but we talk on the phone all the time.

Going back a few years, how did you meet Pontus and end up getting on Polar?

It was an old Carhartt trip to New York. I’ve always known who he was and I remember seeing him in that indoor park in Malmo when I was a little kid. He had just quit Cliché a few years before and was talking about starting up a brand and asked me if I wanted to be part of it. I got sponsored really late so before that I was working full time in a kindergarten and then I went away every winter. I went to Barcelona and to SF twice so I was just working a lot and skating. Then one year later he did In Search of the Miraculous [2010], I had some tricks there then he did the board brand and I was down to do it.

Hjalte and Pontus charge (and also earn the Sidewalk Issue 205 cover) back in 2013. Photo: Sam Ashley.

Are you still working a regular job a couple of days a week?

No, it’s not possible now, there is too many trips. I’ve been home for one month but that’s the first time in a really long time. I can’t really plan anything; I have to be ready to go all the time.

Having been part of the company it since it was so small; it must be amazing to see Polar grow into what it is now? It still seems very tight knit too.

It’s more or less the same actually. Pontus is really good at asking us what we want and if there’s something we don’t like, he’s not doing it. In New York it’s so big, here too. I mean it’s good for us because we can do more trips. It’s crazy… And we didn’t even put a video out (laughs).

You’ve had footage in the Polar promos and web clips for Nike SB, Grey Area [2012] and a part for Transworld but the Polar video is going to be your first proper part in a sense. How have you found filming for it?

Kind of yeah, it’s going to be the first I really worked for you know? Really tried. It’s been cool but it wasn’t as heavy as like Karsten just now. It’s been so long, we’ve been working on this video forever so I never feel pressure or stress or anything. We’ve just been skating every summer and saved up footage. This spring actually, it was like “If you want to get some tricks, it’s now.” But then he closed the deadline and it’s still kind of open (laughs). It’s like a never ending process.

How was it having the guys from France and the US join the team?

It was really dope, we had to get some more people. We’re really good friends now. At first it was the French guys, they came on before Aaron (Herrington). Kevin (Rodrigues) and Paul (Grund) got on and we went out to New York to meet Aaron to see if he was the man and he was (laughs).

As you said, it’s taking a pretty long time for the video. Is there an idea of when it might actually be out and is there any particular reason it’s taking so long?

Every time I ask Pontus he pushes it back. The last thing I heard was between Christmas and New Year but then I talked to Kevin yesterday and Pontus had said that’s not going to happen. I think it’s going to be January now but he knows he has to put it out because all the team is getting really pissed off. It’s just because he doesn’t have time to edit it, he’s too busy. If he had the time it would have been done a long time ago.

From what you have witnessed, whose part should people look forward to?

I really like Dane (Brady) and the French guys. Actually, I really like Aaron’s footage too, it’s insane and then Oski (Oscar Rozenberg Hallberg). I like all of them a lot but Dane and Kevin are the weirdest and most different.

Personality wise or as in the way they skate?

Both (laughs). Like weird to hang with but they’re really something else. You would have to meet them; Dane is the mystery guy. You think he’s shy but he’s just super quiet.

Is there anything you think skateboarders should take away from the Polar video or a certain view it puts across?

It’s hard to explain but I don’t know if it’s going to be that surprising, crazy and cool as it’s kind of late in this whole no-comply/wallie thing. It’s going to be a lot of the skating that’s out now. It’s pretty crazy. I don’t know if it’s just Polar but we talked about this the other day; how all the tricks they were doing three years ago is what everyone does now. I don’t want to give Pontus all the credit but, for sure, he had something to do with it. Especially London guys, they love it, no-comply and wallie guys all over. I don’t think I have one wallie, one wallride or one no-comply or in my part. I’m the only guy (laughs).

Have you got anything else coming up next year?

Yeah, I can’t really say much but I’m working on something with Bobby Worrest I think, it’s not one hundred percent. Hopefully there’s going to be a lot of small, funny projects with Polar. Pontus is really looking forward to not stressing about this big thing and we can start doing more small, conceptual things like he used to do. We didn’t have time for anything over the last two years because of that video so it’s going to be a lot easier to do things.