Where did your interest in art and illustration initially come from?

I just really like drawing and always have. I don’t think it came from skateboarding but that definitely helped developed what I liked, as did listening to metal. Also, going to galleries and my mum worked at an art college so I would always go in and see what the students were doing. I always wanted to make art when I was younger, my aim was to go to art college and then I don’t think I ever really thought much past that. I’ve been very lucky that I’ve managed to mould what I do around drawing.

You studied fine art at university, how you do think studying to that extent has benefitted you?

Of course studying was a benefit, I was one of the only people on my course that wanted to be there and wasn’t just avoiding getting a job. I worked really hard at uni and took advantage of being able to make work for the sake of making work. I learnt a lot about how to live on a budget, what I liked and didn’t like to make or draw and it also taught me to take opportunities when you can. I got to go to live in Kansas for a year while I was at uni, on an exchange program, and I would say that was the one thing that really taught me to get out there, see the world and meet people. I wouldn’t say the qualification of a degree has got me anywhere at all, no one has ever asked me if I have one, but the life experiences gained were beneficial.

Which artists, skateboard companies or skateboarders were an influence when you were growing up? Do you still take a lot of inspiration from those sources?

When I was a growing up what was open to me was limited to what I saw in Thrasher, RAD or what they sold in Surrey Skates in Woking. There was no internet or other shops. That was it; mags and the local skate shop. I really liked old Santa Cruz boards and because I skated Southsea a lot. I used to see Zorlac stuff due to the Abrooke brothers. I guess that’s Jim Phillips and Pushead. As I got older I think I was more into metal album covers and old Victorian illustrations rather than skate brands. I was also really into Punisher comics and I liked to look through my brother’s role playing game books. I read a lot of James Herbert and Fighting Fantasy books too. I liked early Zero and Toy Machine and also I was a massive 151, SMA, Creature, Scarecrow and Anti-Hero fan but I really only ever rode what other people would give me as hand me down boards. I think I missed out on what a lot of people my age would say is the stuff they liked.

How much of an influence is your taste in music?

I’d say it’s a large part, but I think you take influence from everything in your life as an artist. I mean, I lived in a military town and that plays a large part in my work. I also liked to look through old folk stories and tales and that’s often a part of my work along with books by Stephen King, James Herbert and also 80’s horror and action movies. I think that and metal helped to shape the imagery in my work. 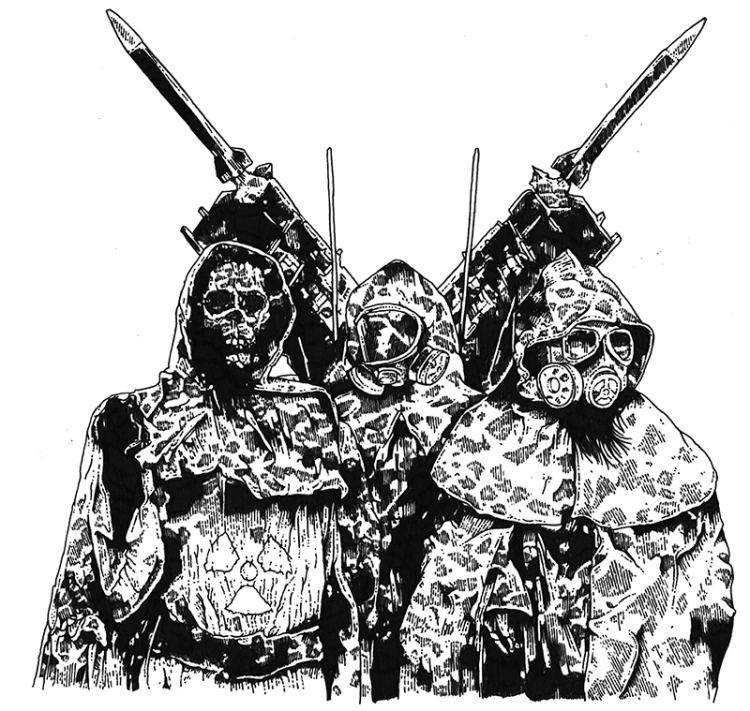 What was the first ‘proper job’ you had in terms working with a company? Skate or otherwise.

Non-skateboarding wise I made artwork for a range of black metal homeware and also designed all the in store and window displays for Silas and their Japan stores. Skate wise, I drew a shirt for Emerica and illustrations for the music review pages for Sidewalk Magazine.

ITV, the BBC, Olympus, Casio, Virgin Records are just a few of the companies you’ve worked for. How does working in those sort of environments differ to doing design work for skate brands?

The subject is different usually, they can be a little more corporate, there’s more contracts involved, there needs to be more agreements for licensing, etcetera… Also you get paid more. But essentially it’s all work for me so I address all jobs in the same way.

Did you start working for skateboard companies and then moved into working with brands outside of skateboarding from the strength of your portfolio you’d built up?

No not at all, I think I worked for ‘commercial’ stuff first. I would say though, making artwork for skateboard brands and metal bands helps to get work in the mainstream world as they want to buy into that credibility the other work gives me.

You’ve held a lot of exhibitions over the last ten years, both in collaboration with companies such as Vans and KR3W, Monster Children Magazine alongside solo exhibitions. How does working with a brand to host an exhibition differ to hosting a solo project and which do you prefer?

It doesn’t really change anything, they’re usually the sponsor or run the space and it just means you have financial support in order to promote a show. If it’s my art exhibition, it’s my work and it’s whatever I want to do in the confines of what I can afford to do. If you can get a sponsor it means the work can be more extravagant.

Why do you feel exhibitions are an important part of working as an artist?

They’re important because it’s totally free for me to work the way I want, I make illustration for a living and I treat exhibitions as a way for developing my own personal work and make things I want to see. Then it’s just great if people want to buy it as well. I think it helps develop both sides of my work. For example I’m putting some artwork into a show in Sydney in November and I’m making three pencil and collage works for it, something I used to make years ago. I’m treating that as a chance to make something new and interesting to me.

What was the main reason you decided to start Witchcraft then?

So I could get the size and shape board I wanted to ride and get friends’ or peoples’ artwork I admired, made into board or shirt designs. 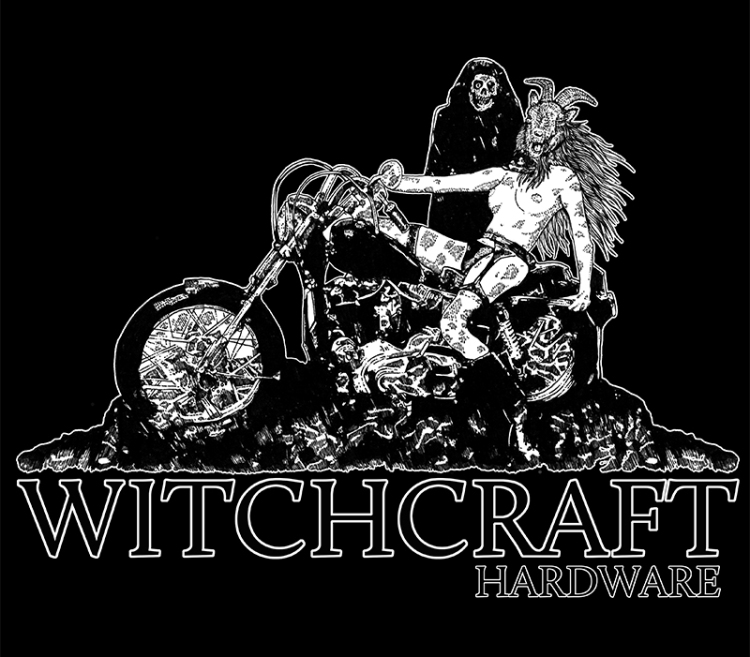 Do you consider it an English company even though you live in Australia now? How does the skate scene differ in Australia to back in England?

I consider skateboarding to have no country or boundaries. It’s just skateboarding, it’s all one language. That’s why there’s Welsh, English, French, Canadian, Australian and Austrian riders on the team. Australia’s different because it’s hot and you can skate everyday, but the internet makes all scenes a lot closer now.

Do the team have a lot of input in the graphics or just leave it down to you?

I decide all the designs, I don’t mind if Alex (Irvine) and the guys want to put an idea forward but in general I try to keep everything tight so it all works together. But more than anything I just want to have fun and make things I think look cool; otherwise, what’s the point in starting a skateboard company?

Was part of the reason for naming it Witchcraft in regards to how foreign and strange skateboarding is viewed by non-skateboarders? Or was it just to compliment the aesthetic and I’m looking too far into it?

Neither. It’s part of a lyric from a Manowar song “Each Dawn I Die”. I don’t think things through that deeply.

As you just said, the brand has a pretty wide reach internationally and one of the most recent riders you welcomed to the team was Steve Forstner. I know you’ve done graphics for Antiz in the past (who he previously rode for) is that how you met Steve?

I met Steve through general skateboarding in Europe and always got on with him and loved the way he skates. When he parted ways with Antiz he wasn’t riding for anyone for a while and Alex suggested he could ride for us. Steve started riding for Trap Skateboards and wasn’t into it, so he came to ride for us.

How did the other current riders become involved, was it mainly you approaching them or them approaching you?

I don’t really remember, Alex looks after the team, most of the original team is just long standing mates that made a good crew, like (Joe) Habgood, Tibs, Vincent Coupeau, Joxa, Max Roton, Mikey Joyce but the more recent riders like Jake and Juju have come from Alex working with them and working it out together.

Is there anything in the works as far as a full length video?

No idea really, we keep trying but then we use it for the internet, we’re not that organised and don’t have that sort of long winded plan for things. The idea is to go skateboarding, have a laugh and hope the company pays for itself. It’s about going skating and making something we’re stoked on.

You’re starting a new wheel company too which should be out by the time this interview is, right?

Yeah it’s called CAR13. I’m working on it with Alex Irvine, he’s looking after the team and I’m just working on the artwork and getting things made. It doesn’t have anything to do with or look like Witchcraft. So far we’ve made 53mm, 55mm, 57mm wheels and have Sam Beckett, Steve Forstner, Jake Collins, Seb Dorfer and a few others on the team.

Rounding this off, you’ve mentioned in a previous interview why you don’t like hip-hop. What’s your opinion of the use of bad hip hop/rap for the sake of ‘irony’ that seems to be plaguing skate videos at the moment?

Finally, with how expensive it is to now study a degree in the UK, would you still recommend that anyone wanting to pursue an arts based career, such as graphic design or illustration, goes to university? Or do you think gaining first hand experience is just as, if not more, important?

I think a good mix of experience and education are a really good idea, I think with everything, moderation is a good idea. I would say that you should follow something you really love, for the act of doing it, not because its cool or can make you money, but because it’s fun and fulfilling. Then the rest will follow.