Though skateboarding in Los Angeles is often thought of as sun and pristine spots, you wouldn’t believe that from watching Vincent Alvarez’s footage. Paying attention to the more rougher travelled routes; his fast, loose and slightly sketchy approach is always something to marvel at. We caught up with Vincent to get his thoughts skating in the UK, life in LA, twenty years of Chocolate and the in progress Lakai video.

Lakai and Emerica were on the ‘Stay Flared’ tour last summer. Was there any really significant moment from that trip for you?

The one memory that sticks out the most is when we were skating some bump to metal loading dock ledge. We all were sessioning it, everyone was getting tricks and hanging out there for a few hours. Andrew Reynolds and I were trying a trick on it and we were getting kicked out by the cops. At the last minute I did my trick and Andrew got my back and landed his trick right after. I did a switch bluntside back to switch and he did a switch backside 5-0 shove it. To me that was skateboarding right there. Trying a trick for a long time with someone and not giving up and then doing the trick back to back while getting kicked out. I’ll never forget that.

You visited England during summer 2014, what was your overall impression of the scene and how do you think the skateboarders here differ to back in the States?

I feel everyone in England is doing their own thing and don’t seem to really care about what’s going on in the US and I can really dig that. I also get the impression that everyone is more united rather than a bunch of different cliques like there can be in the US, at least from what I’ve  seen.

I think that skaters in the UK don’t really worry about doing big handrails and stuff; it’s more about being creative and utilising the different spots that you have out there. I feel a lot more skaters in the US are starting to see more footage of skaters from there and seeing that there’s a whole other side to skateboarding than just being stuntmen.

I feel like a lot of ‘regular’ people in the UK automatically get the impression that you’re just another snobby, rich American. But what I love about skateboarding is that once certain people find out you’re a skateboarder everything about that changes. Well, for the most part. 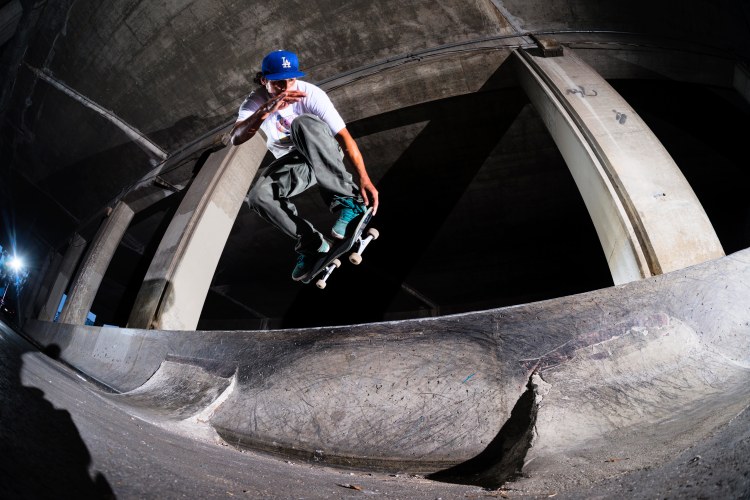 England tends to get compared to the East Coast of America because of the weather, style of spots and generally rougher terrain. Having experienced both, did you feel any there are similarities?

I’ve experienced many similarities between the two. It makes complete sense considering that those were some of the first cities colonised in America. One thing I noticed is that public transportation is fairly easy to get around within both regions. Another thing is that the skaters in both places think that the West Coast is all perfect spots when there are actually places just as ‘rough’ here. There’s also a lot more real street plazas on the East Coast and in the UK.

While on the subject of the East Coast, how did you meet Josh Stewart and end up filming a part for Static V[2014]?

I actually ended up filming for the video through a friend of Josh. I was always out filming with him and he told me that Josh would be stoked if I was down to film some stuff for his new video with a VX1000. We did a couple trips up to San Francisco and England. Then Josh came out to LA and we filmed a few things out here. I’m really stoked that I was able to be a part of the Static series.

I always liked those videos though I never really understood why those and videos made in California were so different. That’s why I always liked Girl and Chocolate, because they had East and West Coast skaters and it didn’t really seem segregated too much in their videos.

Your last video part before that was Pretty Sweet [2012] which had a way bigger budget and a vastly different style of camera work involved. Whereas for Static, I’m guessing it was more like just grab a VX and go?

One of the main differences was that I was able to skate more spots that I mainly wanted to skate rather than thinking of a spot that everyone in the van was into. It was a lot more flexible in that sense. Filming lines was a lot easier as well because we could just hop on the train, skate somewhere and not worry about having to haul a bunch of equipment around. I don’t have a preference on how the quality of the footage is. As long as it’s filmed the right way it really doesn’t make a difference to me.

Next up is another Lakai video, how is filming for that shaping up?

It’s going really good. When we first started filming for it we had Guy Mariano with us and he was really motivating. Showing us spots and meeting at his park everyday to hop in the van. Now it’s a little different trying to get everyone to meet up somewhere because his park was pretty central to everyone on the team who lives in Los Angeles. The process has been a lot different considering that the line up isn’t as big as it was for Pretty Sweet. I feel like it’s more of a tight squad whenever we meet up and go out to skate. I would really like to film a lot more lines with this part. That’s what I’ve always enjoyed filming-wise; to show how I skate, not so much what tricks I can do.

Ty Evans has been a staple of the Crailtap camp for such a long time, how is it having Federico Vitetta leading this video instead of Ty?

It’s different because Ty had so many spots to go skate. I’m sure it’s because he has lived here and been filming here for so long that he has so many spots compared to Federico who was always going back and forth from Europe. It’s also a good thing too because now it gives me more of a motive to go out there and search for my own spots which is really fun. That’s what it’s about right there! But I am bummed that he isn’t a part of the Crailtap camp anymore. He’ s a huge reason why I’m in this position today and I’m so thankful to have met and become friends with him. Chocolate had an Epicly Later’d series last year. It was really eye opening to see the neighbourhood you came from and you said “A lot of kids don’t really find what they like to do. You don’t gotta be in a gang, you can just be in a gang of skaters.” Do you feel that skateboarding stopped you from falling into a bad of crowd or were you never swayed towards that mentality in the first place?

I feel like if it wasn’t for skateboarding I might have gotten into that type of mentality. All I was surrounded by as a kid was gangs and a lot of negativity. My family saw that and didn’t want me to go in that direction. We moved out of that area so I was able to skate a lot more and not get distracted by the neighbourhood. I just wish that all my friends who I started skating with were still skating.

That series tied into Chocolate’s twentieth anniversary. As one of the younger guys on the team it must be very humbling to see the brand’s history showcased like that?

I am very thankful to be a part of Chocolate. At first I wasn’t really ready because I didn’t want to get into it and then just be comfortable and not try as hard. When looking back at the history of it, I really wanted to back up the brand one hundred percent, give it my all and keep that alive.

Thanks Vincent, anything you want to end this on?

I hope that one day all the skaters in the world will not be so segregated. That’s one of the biggest reasons why I’m thankful to travel to the UK and other countries in around the world. At the end of it all, we’re all just playing with our skateboards. Fuck all the other bullshit.