Travelling at a hasty 3mph through the north-western waterways, the team stopped off to skate Leeds, Stockport, Manchester and Huddersfield before rounding things off in the bossman’s native Liverpool. During the trip, we caught up with two of Mackey’s Merseyside prodigies, Vaughan and Evz, for a quick chat as they had to depart midway due to work obligations.

The UK skateboarding community has also seen some terrible loses since the sunny Stockport session this interview took place during and for a little while, it seemed that Liverpool’s staple skateboard store of nearly seventeen years was one of them.

However, on Saturday December 3rd, skateboarders from Liverpool and various ends of the country met in a room above The Merchant bar, a stone’s throw from where Lost Art previously stood. Beers and laughs were shared at this new incarnation, titled The Useless Wooden Toys Society, giving the shop a welcome debut and celebrating the release of Lost Art’s collaboration shoe with New Balance. With these recent events in mind, it seemed fitting to dust this interview off. So, let’s hand it over to them scousers, again.

I thought it would be good to get you guys together as you have known each other for years. Although Liverpool has a really tight knit scene, you used to mix in different circles, right?

Evz: There was a group called ‘The Townies’ and you were in the The Townies, (laughs).

Vaughan: It was a few Wirral boys like Tom Tanner, Geff [Jospeh McGuffog] and a couple of others. Evz and his boys were a younger crew. No beef or anything but that’s just how it was at the time.

When did you start hanging out with each other? Was it when you both got on Lost Art or before that?

Vaughan: Probably a bit of both, I reckon.

Evz: We just grew up, didn’t we? Everyone just started becoming friends.

Vaughan: Because it’s a small scene as well you had everyone start to skate together. The shop definitely helped, it’s the kingpin of the scene.

Evz: The meeting place. Everyone just met at the shop and that was it. 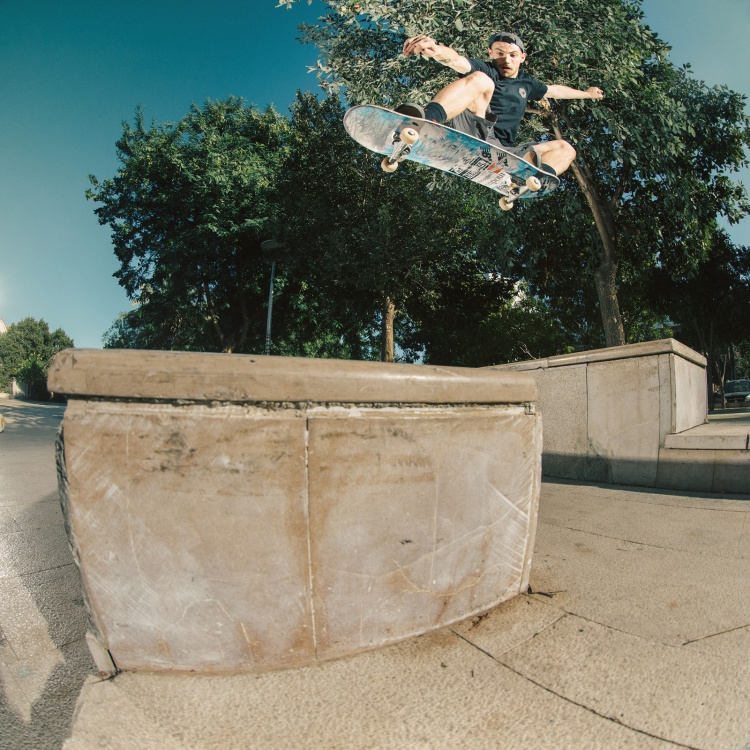 You share a few of the same sponsors but also have really different scenarios with being sponsored. Vaughan, as you’re currently living in London, is there anything you preferred about Liverpool and generally just skating in this end of the country?

Vaughan: For sure, I miss it loads, it’s nice to come back. I would say I mainly miss the people but there’s a good crew of people in London as well though. I don’t know, it’s just Liverpool is my hometown so obviously I miss it and it’s good to see all the boys I don’t get to see a lot of. It’s good to go back to the shop as well whenever I have the chance.

When I stayed at your place at the start of the year you were living with your brother Guy, Jono (Coote), Chris Mann and a few others. Is it right that you have all moved out of that house now?

Vaughan: Yeah, we got kicked out. The fucking estate agent was being a knob basically. Told us the landlord wanted to rent it to a family member which was bullshit. They were just kicking us out. It was full of mould though so it was like a blessing in disguise. Every room had mould and pretty badly as well, I’m surprised no-one got ill. Those guys moved just up the road in Camberwell and have got a skate house and I just moved in with my girlfriend. Still in Camberwell though, I like it down there, it’s mellow.

Do you see much of Tom Tanner with him also riding for The National?

Vaughan: A little bit, we go skating together but he lives in East and I live in South. For some reason there seems to be a divide and no-one can be arsed going to each other’s part of London even though it is about twenty minutes away from each other. I don’t know if that is laziness or we secretly just hate each other…

So, you went from being in the same crew in Liverpool to a different one in London.

In your ‘Haunts’ you mentioned sneaking off to skate Manchester as a kid and getting in trouble with your parents. As we aren’t too far from Manchester right now I was wondering if, had you not ventured down south, could you have imagined living in Manchester instead?

Vaughan: Yeah, actually. It’s a fucking dope city, got loads of sick spots and the scene is amazing. Definitely one of the best places. There’s a few places I probably would have moved to, like I lived in Leeds for three years which was fucking dope, but Manchester is a good city.

What about you Evz, could you see yourself moving out of Liverpool?

Evz: Well I love Liverpool, it’s my hometown and the best city in the UK in my eyes. The people are the best and scousers look after their own. It’s pretty chill. I actually took a trip up to Manchester last week just with my girlfriend and it’s pretty fucking gnarly, within ten minutes we had seen two fights. It’s crazy man. I am quite content to stay in Liverpool but if something came up I really like Bristol, it’s a really nice city and there is a sick scene.

Evz: Yeah, it was a really good comp Lloyds; good people, good weather and a good set of stairs, (laughs).

You’re known for being an absolute workhorse. Are you still grafting in a kitchen five or six days a week?

Evz: Yeah, I’ve got to go home tomorrow, well tonight. I’ve only been here three days and I’ve gotta go straight back to the kitchen and work all through the weekend… It has been a sick trip! We both go home today but I wish I could stay longer.

Are you able to get out skating anymore now than when you shot your ‘Haunts’ with CJ last year?

Evz: No way, (laughs). I get to skate maybe once a week if I’m lucky but it feels like once every two weeks, so that’s pretty shit. Then I come on a trip like this as well and I’m not used to skating this much so I feel the full effect of it. It’s hard work but I love these trips, it’s all good.

How frequently do you two get to see each other?

Vaughan: I guess just when I go back to Liverpool, I go visit as much as I can really. Although Evz has been coming down a little bit.

Evz: I’ve had a few little trips to London on a weekend. Or one day in-and-out sort of thing. Obviously you see all those spots in videos growing up so it’s good to go down there and give them a go. Vaughan has been up to Liverpool a few times and we had Cyprus as well but that was pretty much it.

Vaughan: You couldn’t make all of that.

Evz: Oh yeah! That was last time I got time off work for a skate trip and I had to push for that as well. November of last year for a Cyprus trip with The National and I couldn’t even do the full thing for that either! Half way through I had to fuck off…

I worked in hospitality for a few years so I know what you mean about getting time off. Is it just from your workplace being understaffed or are you quite high up and have a lot of responsibilities that other people can’t do?

Evz: A bit of both really, they miss out when I’m not there but in a kitchen staff just come and go so you need your people who are always there to be there. It’s pretty shit man, innit? Long hours and on your fucking feet all day, it’s not good.

You have been getting hooked up by New Balance quite a bit longer than Vaughan, how did that come around? With the limited amount of time you have to get out skating, filming and shooting photos; do you feel surprised to have been able to pick up a shoe sponsor?

Evz: I just didn’t have a shoe sponsor and was floating around getting some shoes here and there. Mackey knows everyone so something came up and it was something new so I thought I would give that a go. I started getting shoes through Stu Titmus and The Rolling People, and as soon as Mackey took over as the TM it kind of really kicked off from there.

It’s rad and to be honest I’m pretty lucky. I don’t really have the chance to do much, I can’t do all the trips, I had to miss a another National trip like three weeks ago because of work… again. It’s hard and I’m very lucky to have it, I really am. But it’s more to do with Mackey – with him being a friend, he knows what I can do when I am out skating so that has given me a good chance.

On that note, Vaughan, why did you decide to make the move from Nike SB to New Balance?

Vaughan: I just thought it would be a fresh start and knew there would be some mates also riding for it like Evz and Cam. I mean of course with Mackey being the TM I couldn’t say no to that. It felt like the perfect opportunity to have a proper role in something because he has always got good ideas. Like with this barge trip, he has had it planned for the shop for about four or five years but has never had the proper opportunity until now. So, it’s good that he has been able to put those ideas into action.

So, to round this off. How does Mackey’s ability as a boat captain hold up?

Vaughan: His driving isn’t the best… There’s two boats. Mackey is driving one and Ash is driving the other. It’s pretty surreal sleeping on a boat; there’s enough beds for everyone, there’s no sway or anything and it doesn’t make a sound.

Evz: Within five minutes of picking the boat up we had ran onto dry land. The canal is a bit shallower at the side so we got stuck on that straight away. I nearly fell off the boat when he crashed into ours. He’s doing well, I’ll give him that, but he can’t park it to save his life, (laughs).