Over the last year Brenna has ‘filled out’ as he puts it. I think this is rubbish and he’s got fat. Which he hasn’t really, those legs have still got pole vaulting level of pop in them. However, it’s way more fun to wind him  up to get even for the years of bullying I endured when I younger. Knowing Brenna since I was literally a little kid, this is the first time he’ll ever hear this but at first I suppose I was in awe of him. He was the hometown hero, always ‘that guy with the rad style and amazing pop – he still is to this day. 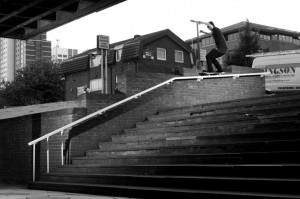 Whether he likes it or not (which he wont as in keeping with all the greats he’s massively self depreciating),  he’s always been a mentioned when it comes to favourite skaters for at least a generation of WUG heads. He could even be considered Wakefield’s Gino Iannucci; flawless, simply yet interesting trick selection, a style to marvel at and could easily produce the best video part you could imagine without even trying. However, as he thinks he’s passed it, it just might take some bribery. In a sense we’ve become like Statler and Waldorf, always rinsing people together and god knows he’s got the  crooked nose for Waldorf (ohohohoho). But an interesting aspect of how he’s completely invested into this role is age as apparently at 26 he is now ‘old’. Therefore, he’s decided to go with something along the lines ‘turning OG’ and has swapped switch ollieing more boards than most can handle in regs for wallrides. Though he still does so higher, better and more stylish than most. But occasionally you might get a cheeky Instagram banger with enough persuasion. A half-mile tailslide kickflip like it was nothing or an equally lengthy kickflip to nonchalant nose manual. In a world where you can witness a seventeen year old dive down a handrail, a true purveyor of style would obviously rather watch Gino push. Or Brenna sit, smoke and complain. 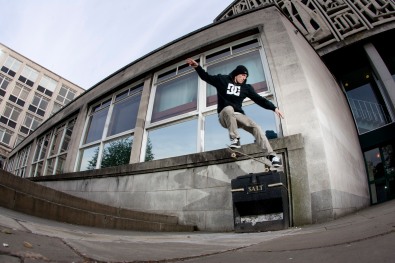 Right then Brenna, who do you skate for?

What do you get up to when you’re not skating?

Spending time with my lovely girlfriend.

Your job includes getting up to mischief in Poundworld warehouse, what are the perks of working there?

For as long as I’ve known you, you’ve been into house music and frequently hit up Back to Basics, what got you into that scene?

I wasn’t that keen on the music before, but  my very good friends brother was a resident DJ there. So when going on trips skating it would get played a lot in the car. I got introduced to a band called 2020 SOUNDSYSTEM who the DJ is also a resident at Basics. I  just got fed up of the same shit, eventually went to Basics and was blown away by the vibe there, the energy is unreal. The people there are some of the friendliest I’ve ever met. Too many good things to say about the place!

Any favourite DJs you recommend people looking into?

Anyone that’s acquainted with you knows you’re a diehard sneaker head. What have been your greatest pickups over the years? Any you wish you hadn’t sold and what favourites have you held on to dearly?

I had a lot of the very early Nike SB stuff, like the Richard Mulder and Gino Iannucci colourways from the first drop of SB Dunks from 2002. I had a fair few pairs of the older stuff and newer releases that I’d sell then buy other pairs. I’ve just sold my last pair a few weeks back, The Reece Forbes ‘Hunter Dunks’ which was one of the first pairs of SB Dunks I skated. Unfortunately, eventually I lost interest and just didn’t like the direction the brand went product wise, with them pushing it into the big chain stores instead of keeping it strictly to the SOS.

A favourite of Brenna’s from his days of baggier jeans, Dunks and double XL tees.

Top five skate shoes of all time then?

Along with shoes, you’re also mad into streetwear. Which brands are producing quality clothing at the moment in your eyes? 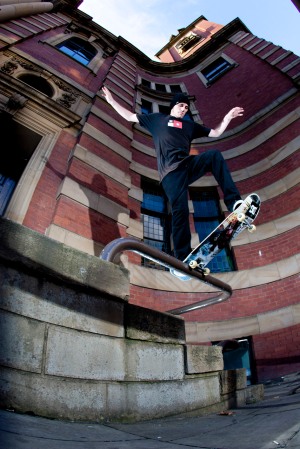 Will Supreme always reign supreme though?

Being into Supreme is like being part of a cult. Any Supreme items from over the years you’ve been really stoked on? Or gone to lengths tracking down and paid extortionate prices for?

I just get it online or got it from the Hip store in Leeds when they stocked it. When it’s gone, it’s gone, I just face it. I don’t like funding the resellers. There’s only the Public Enemy collab from a few years back that I’d pay a bit extra for with me missing out on it. It still bums me to this day when I pictures…

You ride for Sore Skateboards but according to you,  you don’t. You’ve also transitioned into a well respected spot-sitter and seem to bully Vince into putting people on the team. So what’s your actual position? Team rider? Manager? Professional shit talker?

I cant recall saying I don’t, I just get hyped on sitting and watching the up and comers and every one else killing it. The bullying thing is just me wanting to see friends that are young and ripping get hooked up to help them out. I’m not OG but my body feels like it most the time.

Finally, as a master of the manoeuvre yourself, what is the best varial flip in the history of skateboarding?