We’re still feeling the repercussions of Gravis leaving behind the skate shoe world. Swiftly, Arto Saari found his way into a comfortable position alongside Tom Karangelov with the NB# team. Elsewhere, his once Alien Workshop protégé Dylan found his new home at HUF and was able to re-launch the second Gravis model that never was as his debut shoe. Wall climber Jake Johnson has only recently secured himself a highly expected spot on the Converse roster and now Sammy Winter is the latest ex-IVSK8 member to join HUF. To summarize, I’m glad that HUF has taken care of the professional skateboarders out there popping high tricks, combing their hair mid-line, with cuffed pants and a cigarette hanging from their mouth – but we’re still pissed she left us and broke up the family in the first place…

For the everyday skateboarder, the Vans Era or Rowley SPV was a reliable go-to that filled the void left by Gravis. While incredibly simple, these aforementioned shoes were stylish yet well performing enough to skate throughout an entire day. Well that void is no more. Since last summer’s power move of Dylan and Austyn going to HUF, the Sutter has been one of the most popular models to skate, for both its style and performance values.

Review Information
The photos supplied as part of this review are for the Smoke Soft Blue colourway. As this is the third pair of Sutters I’ve skated, this review takes into account experiences with past pairs that were skated for a longer period of time. 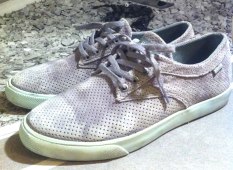 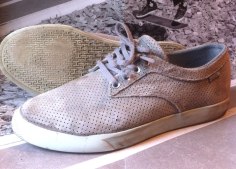 Pricing
First of all I need to make this clear; as an English skateboarder, when a model debuts in America and you see it at $60, you jump for joy thinking it will be available for around £45. You then quickly realize you’re going to pay the same price in pounds that it costs in dollars. Until the Sutter, I had never paid above £55 for a skate shoe, that’s about $95. I found the shoe definitely worth what I considered a high price tag for skate shoes and enjoyed skating them enough to get another pair straight after and go back to the model some months later.

Sizing
The Sutter fits true to size, if you favour a slimmer model similar to the Gravis Filter, it will be one for you and serves as an appropriate successor. First thoughts when putting the shoe on was that they were too tight but the second I laced them up they felt snug. Although there is some heel rubbing, that and any feelings of them being too tight subside after skating in them for a couple of hours. In summary, go True to Size as they wear-in nicely.

Comfort & Cushioning
As I said, though tight, the Sutter has a comfortable fit. The cushioning is as minimal as you’d expect from the shoes appearance, however the insole stayed spongy for the entire time I was skating the shoe. The only downside to the insole is that you can’t swap it out however the insole does not wear thin and is so surprisingly cushioning for such a slim insole.

The minimal lack of padding on top was felt a few times but not frequently enough to put me out. Given that Austyn and Dylan have been the team riders most frequently skating the Sutter, it seems appropriate that the overall feel of the shoe can be likened to a cross between the Gravis Filter and Habitat Austyn; previous shoes of choice for said riders. If anything, this gives me the impression the shoe was designed with input from the two riders as it seemed to be release in conjunction with Dylan and Austyn joining HUF #speculatin’. Although it can feel tight like a Filter and leave some heel rubbing, once skated in for a few hours it takes on a more comfortable slipper-like quality that I felt when skating the Habitat Austyn, while retaining it’s shape and staying true to size.

Comfort: 9. Whether skating or just kicking back at home, the Sutter feels great to wear .You may experience some slight heel rubbing at first but it subsides after a couple of sessions.

Cushioning: 8. While there’s minimal cushioning and padding, the insoles work great for low to medium impact skating. I wouldn’t recommend jumping stairs, you could do without feeling impact the same way as other slim shoes. Instead maybe go for ledges, banks, transition and tricks over picnic tables, etc…

Boardfeel & Grip
To be completely honest, the boardfeel matches probably what you’d expect for any slimmed down vulcanized model. I’m not going to say the cliche’d ‘you can skate straight out the box’ or anything because they do need wearing-in, however they just feel good from the start. The sole is slightly thicker than a Janoski sole but looks around as thin as that of a Filter or Vans Rowley SPV. Although the ‘H’ tread might not be the prettiest, the grip on the shoe is also absolutely brilliant. While unfortunately it balds rather quickly, it is incredibly grippy and HUF’s designers have to be commended on the quality of rubber used. With this and past pairs I’ve skated, the sole was almost completely bald in the main areas, after 4 weeks of skating but it honestly retained nearly the same quality of grip as when first purchased. Obviously from the standpoint of someone not having skated the shoe would be put off by this, but it really is something you have to skate to believe.

Boardfeel: 10. Great boardfeel, everything you’d expect from a shoe this slim.
Grip: 10. One of the best and grippest soles I’ve skated, the quality after 4 weeks was almost identical to that straight out the box despite the tread wearing down.

Durability
As the pair I skated for this review used perforated suede, I was worried how it would stack up against past pairs that had utilized standard suede. As it turns out, if anything, the perforated Suede was of better quality than other pairs of the Sutter I have skated in the past. The perforations didn’t affect anything aside from allowing some increased airflow. It should also be noted that these Sutters, as with all of our reviews, were skated against fresh griptape and I predominantly skate ledges and favor flip tricks. The only downside of the Sutter’s would be that the suede’s lifespan didn’t match that of the sole and a small hole developed just after the 20-Hour mark. Consequently, a small application of shoe goo allowed for this, and past pairs I’d skated, to withstand well into a four week long, fliptrick filled barrage of skating.

Overall: 9. The suede on this model was better than past pairs while the harder rubber sole provides a good mix of durability without sacrificing flexibility.

General Pros
HUF is constantly releasing great colorways of this shoe, especially if you’re looking for something simple and stylish. If it becomes your skate shoe of choice, you’ll probably find yourself with a couple of pairs each season. Whether suede or canvas, there are plenty colorways to choose from. While very tight initially, they wear-in after the 4-Hour mark and loosen up while still retaining their original shape. Throughout the entire break-in period, they’ve remained sturdy and comfortable for many ensuing sessions.

General Cons
While this pair did feature the extra layer of foxing tape around the toe, this won’t always be the case with the Sutters. As it looks, the lower priced Sutter will not come with this extra strip of foxing tape, which leaves the shoe vulnerable to more wear over time. Classic case of paying a bit more for prolonged uses. Interestingly however, though worried the perforations would affect durability, the suede actually proved to be better than the black/white colourway I’d skated twice earlier this year. However, as they were from a previous season, it would make sense to assume that as HUF’s popularity grows, they’ll be putting higher quality material into their footwear.

Summary
If you’re looking for a slim, simple and generally great feeling shoe, the Sutter is great. If you were a fan of Gravi,s you’ll definitely enjoy skating them as it’s the perfect successor for the #NeverUncuff crown. Having not skated any other HUF models, I’m not sure how they might compare, but if they are similar to this I have a lot of faith in what HUF can produce. Top marks for high quality rubber, overall comfort and ability for the shoe to keep it’s silhouette. Although Dylan’s shoe took the cupsole route, I’m hoping Austyn goes for something similar to the Sutter, with his pro model and if so it will be one to look forward to. With the price of the shoe fluctuating between £50 to £60 depending on colorway/material, I highly recommend getting a pair of any future Suede colorways, especially with the extra vulc layer. Hopefully, HUF will start to apply that additional piece of foxing tape on all Sutter models in the near future. Finally, and I’m unsure whether this is just for the UK, but I’m stoked that since more money has gone into the company since last summer, both shoes and clothing have dropped in price slightly without compromising on quality and in some cases increasing quality – which is a good enough reason to support HUF as any. Dirtbag Crew represent.