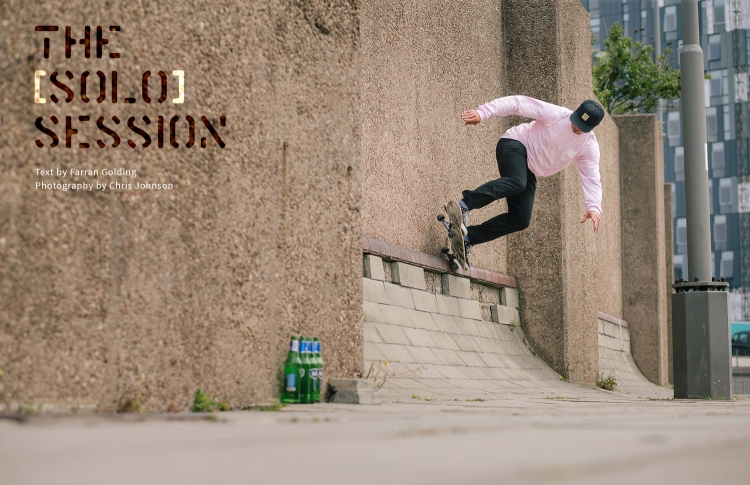 Skateboarders of all ages descended on Liverpool last weekend for the release of Geoff Rowley’s new Vans shoe. Ollie Birch led the way from the shop for the obligatory warm up session at New Bird, joined by Lost Art family members, team riders and the legends that are John Dalton and Jimmy Boyes. After setting foot on his board and instantly hitting a biter; Ollie decided to get the best trick comp underway on the bank to ledge as kids battled it out for a pair of Geoff’s new shoe as the sun blasted down on the DIY architecture.

The crew then headed down towards the big three set by the docks. En route; Jimmy saw fit to deliver a frontside wallride on the famous and misleadingly not so perfect Dock Rd spot he skated in the ‘Rowley Squares’ advert in 2008. Finally arriving at the three, Rauri Jones wasted no time putting his quick footed stylings to good use by battling a kickflip to fire cracker and popping from the top to bottom step with backside 180, amongst other high trousered trickery. Will Kynaston stepped up and began trying to deliver a hardflip down the stair set before moving onto a 360 flip. After giving it his all for about twenty minutes, Will snapped his board and was promptly ploughed into the floor. L.A. bossman Dave Mackey passed his own board onto Will who showed his gratitude by landing the 360 flip a short number of goes later – with a Rauri springing a beanplant straight afterwards. 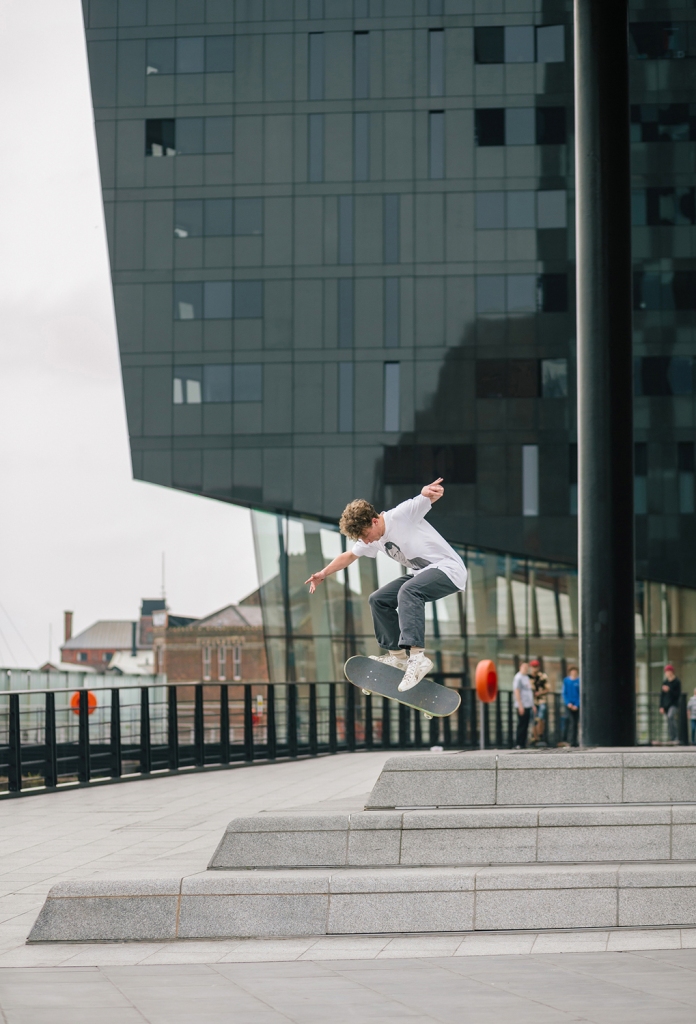 Heading up towards a small courtyard saw wheels grace banked glass windows already adorned in wheel marks. Jimmy Boyes decided that kick turns on the surface weren’t enough and aided by John Dalton, made his way to the roof of the building that hosted the window everyone was skating below. After a few minutes the Durham Apache likely realised the looming chunk at the base of the bank would probably claim him and decided to give this one hectic drop in a miss… Luckily, as five minutes later the police arrived and onto the next spot we were. 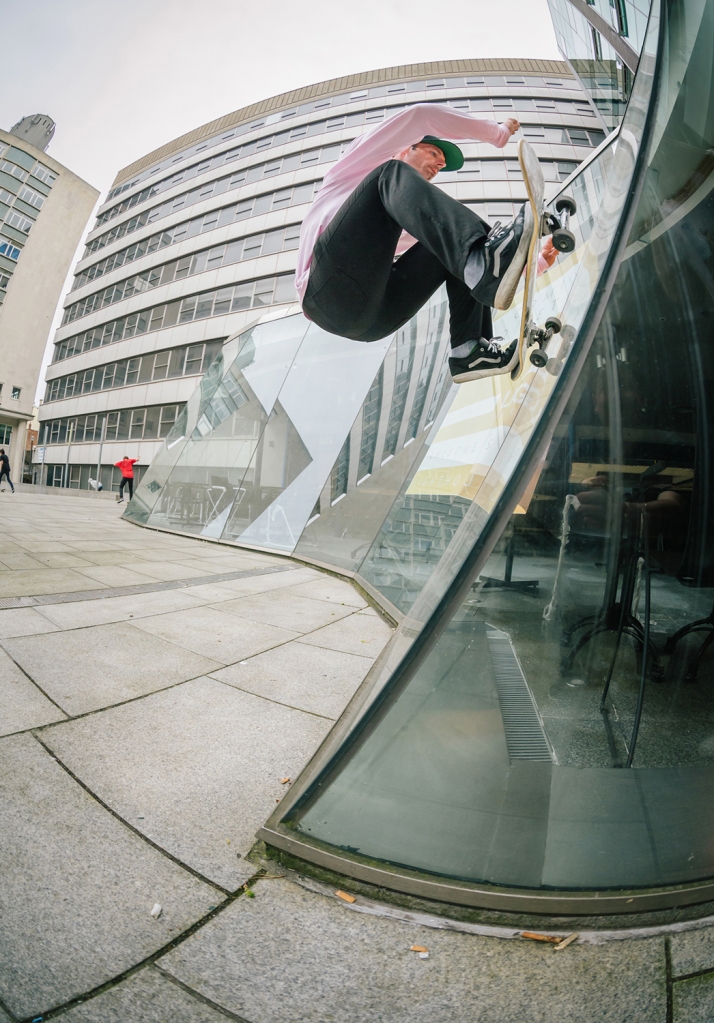 Last spot of the day called for some of the most haggard banks I’ve had the pleasure of skating (Scaff Banks – Ed). Despite old concrete, cracks and grass making for an uncomfortable run up, the vibes at this spot where great as Jimmy delivered frontside and backside grinds before popping one of his trademark ‘sproings’ to tail into the bank. Rauri reeled off backside ollie after backside ollie for Ollie Birch whose lack of satisfaction and calls of ‘one more’ drove Rauri to the edge. Mirrored by John Dalton who boosted a frontside equivalent for Ollie’s lense shortly after that. Fellow Lost Artist Luke Fletcher laid down a banging frontside no comply and crail slide to round off the session before everyone headed back to the store for the evenings screening of Propeller and Owain John’s Grow Up. 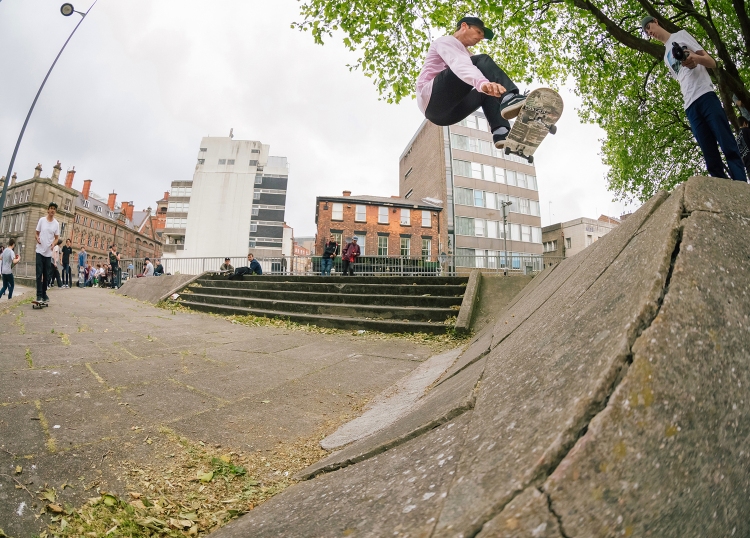 The turnout at the store was packed with youngsters and Liverpool OGs in equal numbers. Ex East/Crayon head honcho Dykie was present, with even a few West Yorkshire folks spilling out into the street to drink beer, catch up and have an all around good time. The crowd then headed up to Bold Street Coffee for an evening of drinking more beer and browsing over the many photos of Geoff ranging from his first ever photo in a mag, to his teenage years killing some long lost Liverpool spots, his infamous, blood-spattered, all white-cover at Five Bridges and plenty more from his recent years and time on Vans. The day was simply rad from start to finish and it’s inspiring to see such a strong, tight knit scene as the one in Liverpool. Geoff might not have been able to attend the event but this didn’t stop the masses gathering in his and Lost Art’s name. Geoff’s influence on skateboarding as a whole is undeniable and I’m sure he would’ve been touched to see so many in attendance. It’s simply remarkable to see so much appreciation for someone so iconic and despite everything he has accomplished, is “still the same guy he was when he was in Liverpool” Mackey assured me. 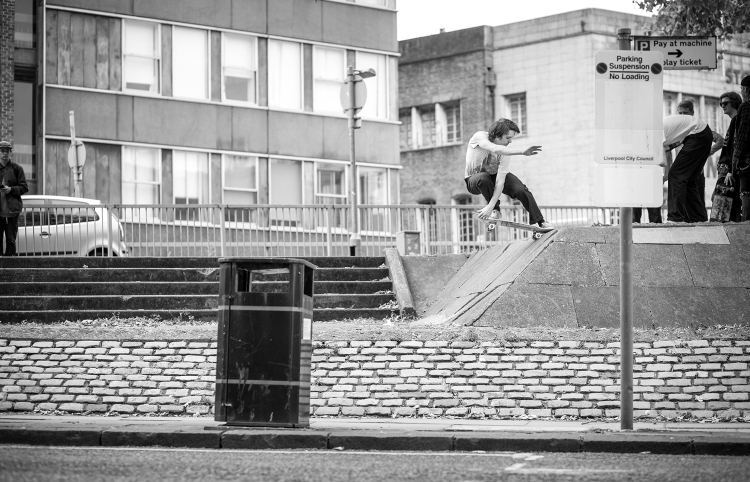