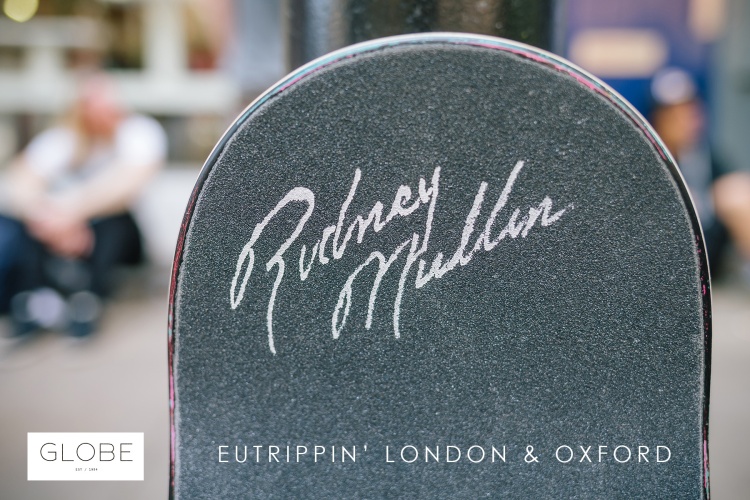 The first part of Globe’s EU Trippin’ tour saw the whole team visit our shores, starting out with a packed signing at Slam City Skates’ Covent Garden store. Kids were spilling out the shop, lining up to meet Mark Appleyard, Louie Barletta, Chris Haslam, Paul Hart and Rodney Mullen to name a few and because of this huge turnout, the demo was delayed for a couple of hours. This may also in part due to the incredibly humble Rodney Mullen who was happy to do a little bit more than scribble his signature on a poster and properly engaged with every kid he met.

Ryan Decenzo chooses to switch bluntslide even though the stairs say drink lager.

Despite the delay, the turnout and stoke was just as high at the demo with new guy on Globe and Cliché’s young dude, Paul Hart, laying waste to the stair set at SB with an outstanding switch heel amongst other bolts bangers. Ryan Decenzo accompanied Paul on this session, delivering insane frontside three 360s both regular and switch and bluntsides both frontside and switch backside, which were received with roof-shaking cheers from the crowd.

Mark Appleyard, being his trademark, powerful yet ridiculously chilled out self casually graced the SB’s beam with a crook and backside smith and haphazardly nollie flipped into the bank all the while dodging three people en route which led to him accidently grinding the edge of the bank/stairs and still riding away as smooth as you’d expect. At the crowd’s request Apples also blasted a nollie backside bigspin down the set despite his claims of, “I’m fucking old dude.” While the stairs where being hammered.

Hefty frontside flip, Ryan Decenzo punishes the SB slabs.
Chris Haslam saw fit to make countless kids’ days by happily taking photos and chatting with them. At one point someone approached Chris with the request of, “my friend couldn’t make it today but he wants to know what your beard feels like so can I stroke it?” to which Chris replied, “go for it but it kind of feels like pubic hair.” Haslam then spent the rest of the demo playing skate with anyone that requested as Chris assured me that stairs weren’t for him anymore and amusingly stated, “it hurts to pop more than an inch off the ground nowadays so I just stick to my manual stuff.” 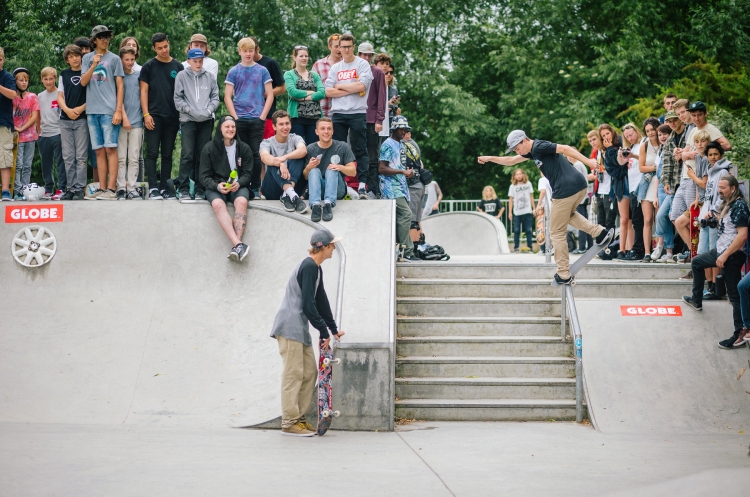 Paul Hart was in machine mode whist at Oxford, backside nosebluntslide like it was nowt.
The next day it was onto SS20 for another signing before the team hit up the Oxford Wheels Project park. This saw Decenzo flip over his fair share of driveways to flat along with Paul Hart once again providing all manner of hammers taken to the park’s handrail and hubba. 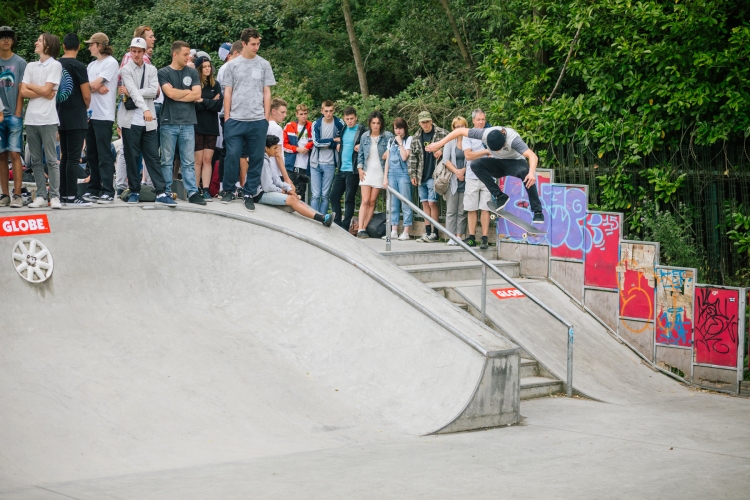 What a name! Fries flips over rail into bank.
It also turned out to be the perfect place for David Gonzalez to display how much of a beast he is by, as you may have already seen, flying high over OG Oxford head Justin Parker. The turnout for both events was massive and before they left to embark on their journey to the rest of Europe, we got chance to have a chat with David and Mark which you can check out on the site as well….

Louie Barletta sessioned with the locals, as he does. Blunt fakie.