Stuart Smith founded Lovenskate in 2001 after graduating from university. Beginning with screen printing boards and t-shirts out of his parents’ garage, this DIY ethos is still present in the brand today. Renowned for their production process, Lovenskate take pride in developing graphics using more traditional methods.

Drawing inspiration from techniques and skateboard artists of days gone by, the laborious task of building a graphic over the course of several silk screened layers has never seemed anything out of the ordinary for Lovenskate. Rather than focusing on making every screen layer perfectly cut, owner Stu sees the beauty in the imperfection of a jagged edge, preferring a stylised feel to what can be produced flawlessly using more modern methods. 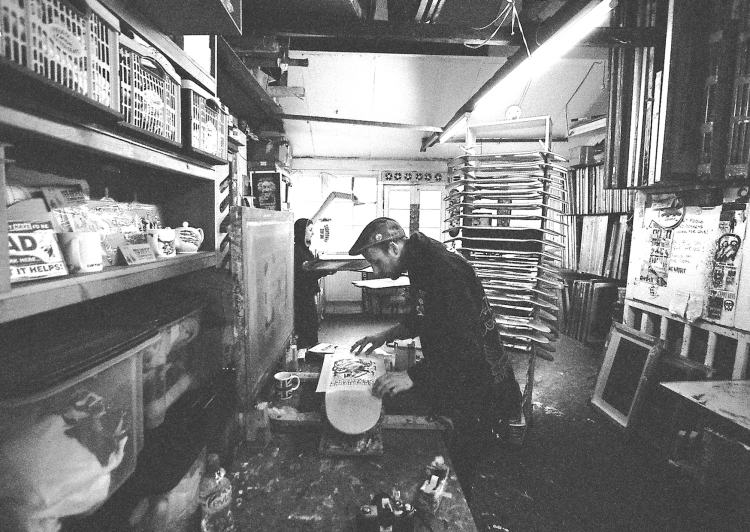 All boards are pressed on Pennswood and hand screened in East London with most graphics coming from Stu, himself. Contributions have also been penned by renowned scribblers Jon Horner and Richard ‘French’ Sayer alongside collaborating with Jay Croft, of the American zine Street Canoe, in 2015.

Nods to British institutions such as tea, fry up breakfasts, Tommy Cooper and kerbs keep Lovenskate’s graphics amusing and close to home. While the poignant ‘Devrim Zamani’ or hilarious ‘Perverts Who’ve Let Us Down’ boards are evidence Lovenskate are more than willing to tread more controversial waters.