During the recent adidas Away Days premiere in old London town, we managed to collar two of the UK representatives currently holding it down for the three stripes.

Farran Golding cornered Chewy Cannon and Benny Fairfax and set them both on each other to talk about history, travel and filming for the long awaited adidas video.

Read on to dive into an earful of banter and become slightly wiser as to what makes these two occasional London imports tick.

What are your earliest memories of each other?

Chewy: Yeah, Radlands basically. Back in fucking ’97 or some shit? I just remember him doing backside everything down the handrail. Joey Pressey and Chris Oliver were there too.

You’ve both had different board sponsors over the years, have you always remained close friends before riding for adidas, and then Palace, together?

Chewy: I never really liked him to be fair, (laughs).

Gutted you had to share the adidas/Palace part then?

You rode for adidas as a European rider before moving on the full international team. As adidas is a European company, do you feel that has given you a better opportunity of going from just being flowed shoes to getting fully on the team and making a career out of skateboarding?

Chewy: Definitely. Well, it sort of changed, it was like a European team before there was even an international team, you know? Then the marketing changed. I’m from Yarmouth so I’m blessed either way, (laughs). I’ve been doing alright. 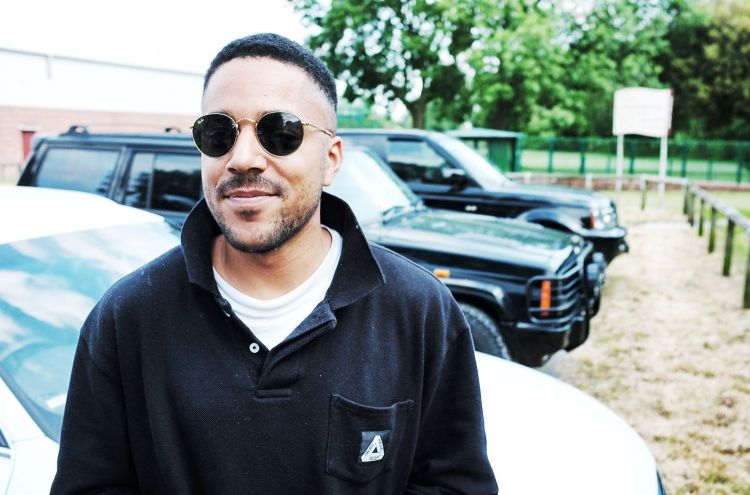 Benny and the Jeeps.

Benny, you got on adidas whilst you were out in the US and riding for Stereo. Again, as adidas is a European company, has it been easier to be part of it since relocating back to England?

Benny: Yeah, it’s easy because there are a lot of Europeans that are part of the company and they don’t mind us being here. So, it’s just nice to be home, yeah.

Did you feel a bit distanced from everything while in America?

Benny: I don’t know, I wouldn’t say it was weird. I was just stoked, you know? Just happy to be there.

You’ve both lived in London then left for a while, and ended up moving back. I know Chewy moved to Barcelona for a bit…

Chewy: I’m still there, kind of keeping that on the down low a little bit. Got to keep up the illusion of being a Londoner, you know? (Laughs).

Did you move to Australia to stay with Andrew Brophy for a bit, Benny?

Benny: I’ve just been travelling a lot. Go there for holidays to get away from the winter but I never ‘moved’ there.

What do you miss the most about London when you’re away?

Benny: Friends and family… and banter!

Chewy, how has filming for Away Days compared to the European adidas video, Diagonal [2009]?

Chewy: It was a lot more concentrated on filming last time, I got more time to film with one filmer. This time it was always on trips and it’s with big groups of dudes as well. Everyone is really fucking good, obviously, so it was hard to find time to film as much. That’s definitely a bit different but it has been amazing, been good to travel a lot more.

Do you prefer just filming one on one then?

Chewy: No, not one on one but maybe not with that many people. I guess I like to find my own spots and stuff and it’s hard to do that with lots of people. When you’re on tour you get taken by the guide to spots but it’s all good and enjoyable… Yo, what up!

Chewy: Tyshawn interrupting… Give him a question.

Tyshawn: Oh, is this an interview?

You’re pretty young: did you know much about these guys before you got sponsored by adidas?

Tyshawn: Uh, I knew about Benny from Skate, the video game, but I didn’t know about Chewy.

Has filming for Away Days been similar to Diagonal at all because Torsten Frank has been one of the main filmers?

Chewy: Yeah, but I think I filmed with Chris Mulhern a bit more. There have been a few. Poobert (Justin Albert) as well, I’ve been filming with him quite a lot. It’s just split between a lot more filmers. The whole thing has got a lot more elaborate, like adidas skateboarding has got so much bigger since I got on.

What have been the main things that have affected how much time you were able to put into Away Days?

Chewy: Plenty. I’ve had loads of shit. I’ve had quite a few bad tours where I’ve been sick or got injured straight away.

Benny: You stubbed your toe real bad d’int ya?

Chewy: All the way to Australia, yeah. Two or three days in: broken fucking big toe.

Benny: I had elbow surgery, broken fingers, bruised heel – that was fucking six weeks out. That’s the worse one. 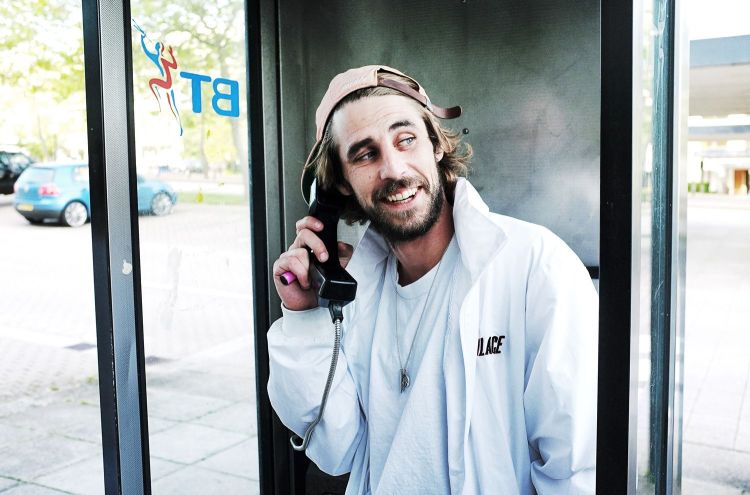 The time sponsored by Chewy is…

You two share a part with Blondey McCoy, right? Was the idea with that to go for a similar vibe to the adidas/Palace part that I mentioned earlier?

Chewy: It’s the three of us, yeah, all us English guys. I guess it’s just fitting for that to happen and there’s a lot of people in the video so, to have us all together, I’m just as stoked on that as I am to have a part.

Benny: I think also, there are so many dudes on and they didn’t want a three-hour Fully Flared [2007] style thing. They wanted to make it short and sweet, not a massive, long video that people fall asleep in by the time it’s over.

Chewy: Which I actually did, (laughs).

You fell asleep at the LA premiere?

Chewy: Yeah, jet lag… I got there like four hours before. We got stuck and had a layover flight and I got up really early, so jet-lagged… Just didn’t sleep and two parts in Benny was waking me up.

Benny: I missed half the video because he was trying to get the hotel room key so he can go home. I was like, “You’re not fucking going home mate! Come on, stay awake; let’s get you some wake up juice.”

Chewy: Being in the dark man, it just got me, (laughs).

There have been adidas trips over here whilst filming for Away Days. What sort of reactions did the US team have to the spots here? Mark Suciu has skated here a fair bit so I’d imagine he settles in quite easy.

Benny: We took them to some rugged shit but they still smashed it because they’re that good.

Chewy: A lot of them love that kind of stuff anyway, Dennis (Busenitz), he can skate anything. Silas (Baxter-Neal) is really good with spots like that as well. Those two, Scoochie is good, but he ain’t the best, (laughs).

When you skate away from home, like in LA, does perfect concrete throw you off a bit because you’re so used to skating here?

Benny: I know that feeling, yeah. It’s just not the same. You’re used to skating tarmac and paving stones and then you go to one of these polished fucking concrete, shiny skateparks and it’s weird. I can relate to that. But then California is a different story in general.

Chewy: California: get used to being in a car man. Sometimes it’s a bit long, traffic jams and shit, it’s hard work.

Because most of the Away Days trips have been to other countries, were you more motivated to get tricks while on trips or does that situation put pressure on you in a more stressful way?

Benny: Both, obviously you wanna get shit because you’re like, “Well, I’m never coming back to this spot” and then obviously there’s pressure because you want to do your best as it’s a big video.

You have a full run down of spots before getting to whatever country or city though, right?

Benny: Some places we would get a little spot book to flick through or we would get an email like, “Here’s all the spots, figure out what you want to go to.” Because everyone wants to skate different shit, you know?

I’d guess you are more used to just heading out and if someone happens to have a camera, then you would film something.

Benny: Yeah, I like that better. Sometimes the planning works against you.

Chewy was quite involved with the Long Live Southbank campaign. Do you think the London scene is tighter knit in the aftermath of that?

Chewy: Southbank is the London scene, man. It’s fucking come from there and it’s a massive part of everything so I’m pretty proud it’s still there. I just think it’s always been tight but we’ve kept the predominant spot. I don’t give a fuck too much but Southbank matters to me. Maybe, the younger generation realised fighting for shit is worth it, because a lot of people wrote it off, so I’m pretty stoked it’s there.

When I last spoke to Hold Tight Henry (Edwards-Wood) he mentioned a new video he’s just starting. He also mentioned you’re going to film a little bit for it.

Chewy: Yeah, he’s said something about that. I’m down to go filming with Henry man! He’s a good mate from back in the day so I’ve always been filming with him, you know? Hold Tight London shit!

You’ve both been in web clips over the last few years but this is your first appearance in a full-length video for a while. What place do you think videos like this have in skateboarding at the moment?

Chewy: It’s good to see them. The media is so quick and fast now that people expect something everyday so you can kind of get lost in filming a three-year project, but it’s good to see the final thing. I mean; I feel proud to be part of this video just because of how many people are in it. Skating with Mark Gonzales and shit and being in a video with him, (laughs).

Benny: It’s good to do something that lasts because there’s so much skating out there and because of the Internet, things are just forgotten about in a day.

What do you think it represents about the companies that still choose to produce these videos?

Chewy: It’s admirable, you know? It keeps the roots of where we came from because I think that kids have lost that in the way. Like, Instagram clips are now a minute long, they have no need to even go to a premiere, which is something that is missed in skating. But it’s good that companies still do it.

With this wrapped up, the next thing everyone is expecting to see of you both is in the full-length Palace video. Any word on that?

Now Away Days is done, are you relieved to have more time to put into that side of things?

Chewy: To be honest, we mainly filmed on trips for this so it’s not like all of our time has been doing that anyway.

Because the Palace video is just gonna be in London, right? So, it’s not like you’ve had to split footage between the two as much as you would if they were both in the same format.

Chewy: We’ll see, I don’t know who told you that, but we’ll see.