As a musician who lovingly imbues the conventions of country and folk with Yorkshire-based nuance, The Tandem Café in Meanwood is perhaps the most fitting venue for a Serious Sam Barrett gig.

A quaint mix of a café, curio store and art space with a tiny wood burner crackling away in the corner, the intimate venue was basked in amber glow and filled with the musky aroma of incense; patiently awaiting Barrett’s arrival on Friday’s autumnal evening. Inside The Tandem, it’s very easy to forget you’re two miles from Leeds’ centre in much the same way Barrett’s music transports you away from heart of the north despite his home city, and surrounding landscape, being prevalent throughout his lyrics.

Barrett arrives clutching his guitar case accompanied by Pete Fields (Slow Motion Cowboy) over from San Francisco and touring with Barrett for the past week. He is a walking blend of Americana and Leeds skateboarder and his instruments affirm this; his guitar sports a faded ‘West Yorkshire Against the World’ sticker while another on his banjo reads ‘RWTB’ (short for ‘Rolling With The Boys’ – a group of fellow skateboarders in Leeds and constant inspiration throughout Barrett’s song writing).

Alf’s Song, Barrett’s usual opener, is a fast-paced and emotive tribute to his late grandfather – a trade unionist who grew up a few streets away from tonight’s venue. Rebellious, courageous and labouring; Alf is an admirable man who ‘worked for the union until he couldn’t work no more’ and Barrett’s lyrics and upbeat acoustic strumming conjure the image of a young boy sat bewildered as their grandfather regales them with stories from the comfort of a rocking chair. 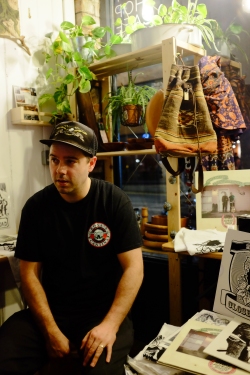 Barrett’s storytelling isn’t confined to the music itself and his somewhat self-effacing showmanship shines through the short, often amusing, introductions to his songs. Back On the Jack, an early number from Barrett’s “boozy days of living in Hyde Park with skateboarders,” is fuelled by “whiskey and Thin Lizzy.” Whereas Sometimes You’ve Got To Lose, a reflection of occupational hazards, written after Barrett broke his wrist in four places is “about how being a skateboarder and folk musician don’t mix.” After an a Capella rendition of The Holmfirth Anthem, he assures: “There will be more of that later if you couldn’t stand it. A while back I singing unaccompanied and after that one an entire family of eight went: “Fuck that” and left the pub.” Whereas The Yorkshire Tupis a reversion of The Derby Ram – “But there’s no such thing as Derbyshire,” smiles Barrett to a chuckling audience.

Rounding off a trio of traditional folk songs with The Female Drummer, a tale of a girl who dresses as a boy in order to join the navy, Barrett’s sincere delivery is emphasised by the substitution of his usual country tone for a broader Yorkshire twang. It’s the first of more sombre songs which set the tone for rest of this evening, with the heartbreaking waltzes Long Gone and Hurry Backfollowing on (although they share a similar theme the former is the more powerful of the two). The solemn tone is carried until Barrett’s final tune, Rock N Roll Heart, is declared an ode to his musical heroes – subtly nodding across the room at Pete as he says so.