The Nike SB ‘UK58’ Tour passed through Leeds couple of weeks back with Casper Brooker, Chris Jones, Kyron Davis, Myles Shankie and Mark Stern in tow alongside ice-man Reece Leung and sterling bloke Cubic on camera and driving duties, respectively. Eniz Fazliov was also set to make an appearance however the previous night’s dinner plans triggered a couple of undetected stomach ulcers and Eniz instead found himself residing in a Scottish hospital bed rather than enjoying an autumnal evening in Leeds.

As the swoosh crew popped by the shop, we collared Casper Brooker to get up to speed on life after turning pro, rooming with Jacob Harris and our pal Mike Arnold, ponder the influence of ‘Vase’, discuss sponsor changes and talk all things Atlantic Drift before Casper and co. headed up to Hyde Park to bask in the remaining hours of sunshine. 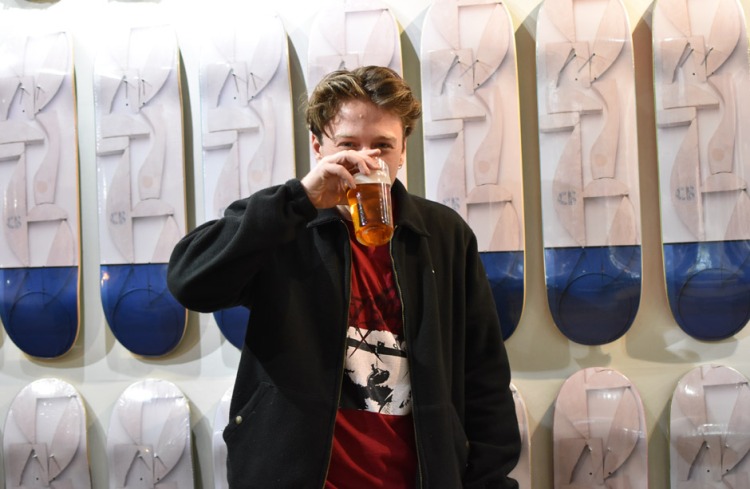 Last time I interviewed you was three years ago, just before Vase [2015] was released and you’d had quite a busy year with travelling and filming for the video. Apart from being able to legitimately put ‘professional skateboarder’ on your CV, how does your life now compare to back then?

[Laughing], it’s basically the same just with more travelling. Especially with Atlantic Drift. We’ve been doing that every few months for the past two years and then there has been Nike stuff going on. Chris Jones was filming a part, I was filming a part about two years ago, it’s just all been pretty full on. It’s been great through; more of the same but better. More intense but I don’t really like being in London for too long at a time so it’s perfect.

Where in London do you currently call home?

I’m living in Peckham with Mike Arnold and Jake Harris which is great. I’ve lived there for four years but we just got a place together about three or four months ago.

Have things ever got tense on a filming mission with Jake and the drama has carried on into your home life?

Not here but that happened when we used to live together because I was filming a part, I was younger and not being as aware as I should have been. There was a couple of months where I wasn’t even considering that it’s his time too and I would bail on going skating at the last minute. He got pissed off – rightly so! I think there was an argument in the house but it got cleared it very quickly and we were cool, [laughs].

You’ve said that you didn’t properly have your head in gear with filming for Vase until the last nine-or-so months. Then about a year after the video you came out with that standalone part with Jake for Free. Was that making up for lost time with Vase in a way?

Kind of. But again I ended up having something happen in that time. I broke up with my girlfriend right in the middle of that part and that affected it a little bit. Which is basically what happened with my Vase part too, [laughs]. I think that was essentially the idea but with any project you always think you can do better. I was hyped on how it turned out, there was some tricks in there I was really happy with. I just wish I had filmed more lines and made it spread out a little bit.

There was so much anticipation leading up to Vase, which Jake delivered on, but what effect do you think the video has had for Isle as a company since then?

It definitely gave Isle a face that it didn’t have before Vase came out. People didn’t really know too much about Isle; it was Nick’s art, his vision and there wasn’t anything that really went along with it. Jake absolutely smashed it with that video so it gave the company a good chunk of its identity and really helped to put Isle on the map.

How does going on filming missions and trips for Atlantic Drift compare to when you were working on Vase?

It’s very different, because with a full-length video – that’s the only full length video I had been a part of [Casper had a part in Slam’s City of Rats but Vase was his first for a company – FG]. I was younger and Jake’s very good at what he does so I didn’t really know how to work in that way. I was a lot better with Atlantic Drift because I kind of learnt how to do it a bit more ‘professionally’, so to say. But the Atlantic Drift trips are funny because everyone is so close now it’s like there’s a particular ecosystem. We all know how each other work and no one breaks away from that. It all goes very naturally.

Is there less pressure as there’s no looming deadline for this grand production which has been a few years in the making.

Definitely. I mean they come out frequently and you know you’re only on the trip for two to three weeks but there’s a large amount in pride in these kinds of things so you want to be productive and leave your mark in the edits.

What has been your favourite Atlantic Drift trip so far?

It’s hard to say because we’ve been to some sick places but my favourite, because we did two trips to New York, was probably our second trip to New York. We were there for two weeks. We were staying in a really good apartment, right in the fucking mix of it on Essex Street in Manhattan, everyone had a good time and got loads of footage so it was the perfect mix. San Francisco was amazing and Hawaii was unreal as well. 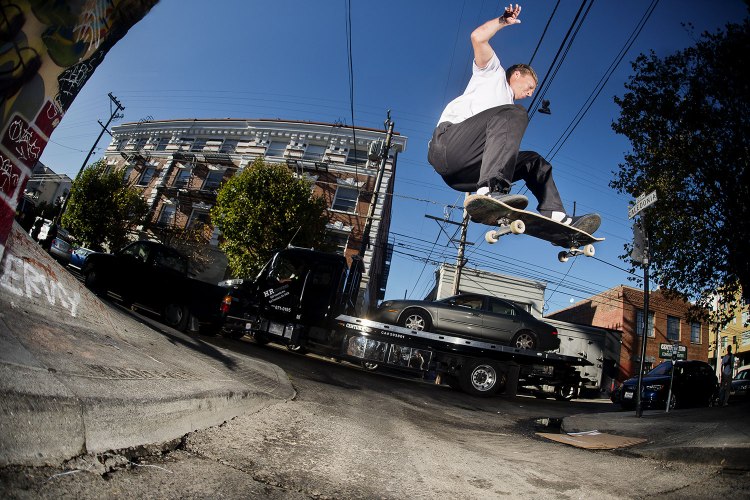 Was going to Hawaii for Tom Knox’s stag-party originally planned as an Atlantic Drift destination or did the video come of the back of Tom’s celebration?

Well, because Tom’s such a neek… [Laughs], I’m joking. Basically, we’re not going to go to fucking Magaluf for a weekend for him, Tom’s idea of a good time is being out skating with his mates and trying to film. Which is great, we all envy him for that. There are sick spots in Hawaii, we wanted to do a trip there and thought we should make it so it was at a nice time for Tom as well. It wasn’t for either/or – both just blended well together.

When the Atlantic Drift series started, Mike Arnold was still riding for Skateboard Café. How quickly did the talk of him getting on Isle come around?

Well it’s funny because Jake went on a Converse trip with him to Nicaragua a few years ago and it was talked about. Then after everyone had been hanging out with him it came up more and more but Mike was pretty set on staying with Café. Then I think it was during the San Francisco trip we started to pressure him about it more than we had done [laughs]. Then him, Jake and I went to New York afterwards for a little side mission and I think that’s when he made his mind up. Skateboard Café is sick but it just made sense for him to be on Isle.

Out of all the brands which sprung up towards the end the 2000s/early 2010s, Isle has had the most consistent line-up. Is there a reason the team has stayed small or is it just because you’re so tight knit it’s difficult to find another person who fits?

Well, again it’s like the Atlantic Drift thing I mentioned with having a little ecosystem, everyone knows each other so well and knows how to work with each other in a certain way. It’s not like some teams where it’s: “Oh yeah, I’m teammates with him but I don’t really know him.” Everyone can call each other up and go for dinner or something like that. I think people are pretty particular which is a good thing.

You and Mike are also riding for Supreme now. Can you shed a bit of light on how that happened?

[Laughing], I don’t really know. All my friends work in the London store and I’ve known Jagger [Dan Ball, manager of Supreme London] for a while and then it just happened naturally through that I guess. Neither of us were expecting it to happen so it’s cool.

You’ve rode for Slam for a really long time, how did they take it? I had a laugh the other day, as your name is still on their team page but it’s crossed out.

[Laughs], yeah Mark Jackson does that stuff, it’s pretty funny. They were super cool about it. Jackson and Jake [Sawyer] still work there and Jake’s the team manager so he took it really well. I love those guys.

As you frequently get asked about the switch from Emerica and Heroin to Nike SB and Isle, and now with moving from Slam to Supreme, do you ever worry about the perception people may have of you switching sponsors?

No, I literally couldn’t care less. I rode for Heroin for four or five years but bought the boards consistently for three years beforehand. I rode for Emerica for three years but bought the shoes for four years beforehand. I was also a kid. I changed. With Slam and Supreme that was just something that kind of just happened. With the Emerica to Nike thing, if people would have anything to say about it now, I think that’s pretty silly. People change and I think we’re at the point in skateboarding where people don’t really think like that anymore.

Whilst we’re on the subject of change, you’ve previously touched on how the scene at Southbank has shifted and mentioned you aren’t keen on the way that the younger generation act. As Long Live Southbank are now concentrating on re-opening and expanding the space do you think that would have a positive effect on the attitudes down there?

Recently, I was pleasantly proved wrong about that. Those kids now are all just skating which is sick. I’ve been going to Southbank way more and I think I was wrong at that time just because I’d idealised this Southbank scene which I had grown up with and it wasn’t like that. So, everything I said in that interview is silly and I sound like a dick. It’s great what Long Live Southbank are doing and it’s crazy how much money they’ve raised, they’re nearly there now. Big respect to those guys.

You mentioned you get a bit restless when you’re in London for too long and, although you’ve travelled a lot, I guess you haven’t spent that much time up north apart. But what spots and skaters spring to mind when you think of skateboarding up here?

No, I haven’t really spent too much time in the north, I’ve actually only ever been up here on trips. Obviously Rogie [Stephen Roe] and Joe Gavin spring to mind when it comes to Manchester. I of think Dave Mackey, the legend, and Howard Cooke for Liverpool. I watched Josh Hallett’s video [Paul,] that was cool, I really liked that. I do weirdly think of Mike Arnold for Leeds even though he’s from Bristol. But that Dale [Starkie] kid is really good, isn’t he?

Yeah, but he doesn’t need telling that. Cheers, Casper!